You are here: Home / Balancing Evils Judiciously: The Proslavery Writings of Zephaniah Kingsley... 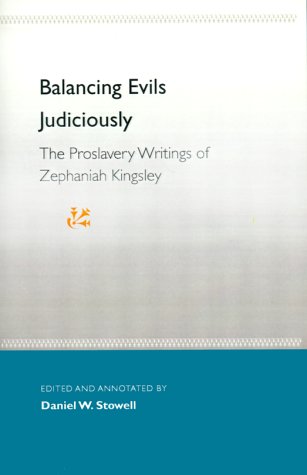 For the first time, all the proslavery–but also pro-black–writings of Zephaniah Kingsley (1765-1843) appear together in one volume. Kingsley was a slave trader and the owner of a large plantation near Jacksonville in what was then Spanish East Florida. He married one of his slaves and had children with several others.

While Kingsley eventually emancipated all of his children and their mothers, he became alarmed at the deteriorating status of free blacks after Florida became a territory in 1821. His unusual protest of their treatment, “A Treatise on the Patriarchal System of Society,” called for a three-caste society that separated race and class. He envisioned a buffer caste of free people of color between whites and enslaved blacks, but united with whites by economic interests. The treatise simultaneously upheld the legitimacy and necessity of slavery yet assaulted the white southern premise of abject black inferiority.

Daniel Stowell carefully assembles all of Kingsley’s writings on race and slavery to illuminate the evolution of his thought. The intriguing hybrid text of the four editions of the treatise clearly identifies both subtle and substantial differences among the editions. Other extensively annotated documents show how Kingsley’s interracial family and his experiences in various slaveholding societies in the Caribbean and South America influenced his thinking on race, class, and slavery.

In despair of ever changing the slaveholding patterns of Florida, Kingsley finally settled his mixed-race children and several of his slaves in Haiti; however, he left behind more than 80 of his slaves to work his plantations in Florida. When he died, these African Americans remained in bondage, unfortunate victims of hardening American racial attitudes and of Kingsley’s effort to “balance evils judiciously.”