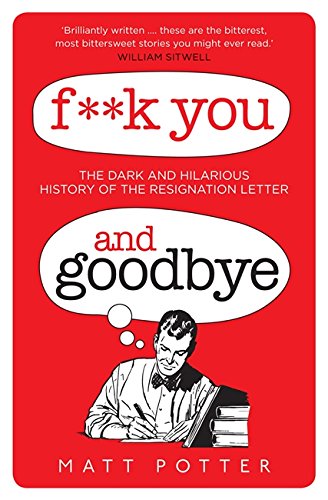 F You, Box: And Other Observations of My Cat’s Inner Dialogue
Rs. 441 Losing You: The Story of Losing My Wife to Pancreatic Cancer
Rs. 644

History is written by the winners. It’s the survivors – the faithful servants, the insiders, the ones who stick around, who can adapt to almost any condition – who get to write the official histories. They publish the memoirs, park in the directors’ spots, erect the statues, form the new governments, wipe out the pockets of resistance, recruit the new starters, set the agendas, talk on the documentaries and retrospectives. Yet theirs – the official version – is never the whole story. There’s another side that we only glimpse through the cracks. The quitter’s tale offers a far more compelling, and often a more honest version of history. It’s full of self-deception, bloody knives, betrayal, honour, disgrace, disgust,thwarted ambition and shattered hopes, and sometimes a wicked sting in the tail…It includes letters from these famous resigners: Richard Nixon,Steve Jobs, Che Guevara, Wyatt Earp, Geoffrey Howe, Richard Peppiatt, Mikhail Bulgakov, George Orwell, Roy Edward Disney (Walt’s heir),King Edward VIII, Groucho Marx, John Profumo, Ruud Gullit, All the Enron resignation letters, Dave Lee Travis, Andrew Mitchell, Roy Keane,Giles Coren and Charlie Sheen.