You are here: Home / The Psychology of Genocide: Perpetrators, Bystanders, and Rescuers: [email protected] 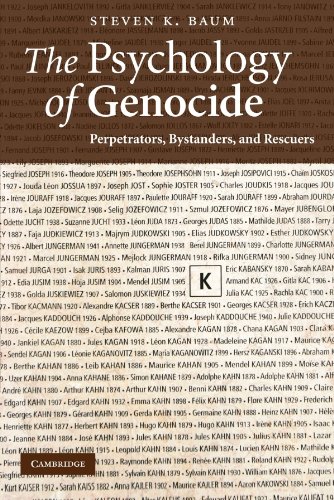 Genocide has tragically claimed the lives of over 262 million victims in the last century. Jews, Armenians, Cambodians, Darfurians, Kosovons, Rwandans, the list seems endless. Clinical psychologist Steven K. Baum sets out to examine the psychological patterns to these atrocities. Building on trait theory as well as social psychology he reanalyzes key conformity studies (including the famous experiments of Ash, Millgram and Zimbardo) to bring forth an understanding of identity and emotional development during genocide. Baum presents a model that demonstrates how people’s actions during genocide actually mirror their behaviour in everyday life: there are those who destruct (perpetrators), those who help (rescuers) and those who remain uninvolved, positioning themselves between the two extremes (bystanders). Combining eyewitness accounts with Baum’s own analysis, this book reveals the common mental and emotional traits among perpetrators, bystanders and rescuers and how a war between personal and social identity accounts for these divisions.