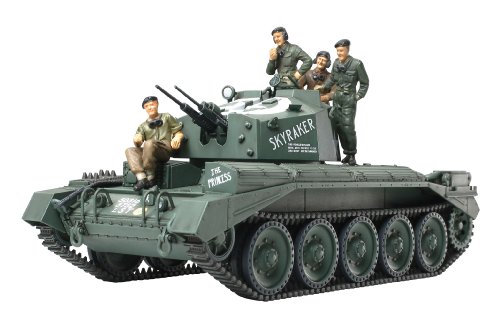 325461:48 United Kingdom Crusader Mk.III Anti-Aircraft Tank with 4 FiguresIn the space of just 2 years, Tamiya has established the 1/48MM Series and the industry has followed our lead as acceptance of this scale continues to expand. As we head closer towards the milestone of our 50th 1/48 MM model kit, Tamiya is proud to announce the release of the unique British Crusader Mk.III anti-aircraft tank.About the Crusader Mk.III Anti-Aircraft Tank Mk.IIIAlthough replaced on the front lines by more capable tanks, the British Crusader cruiser tank was still useful in other roles. The Crusader Mk.III was used as a base to meet a requirement for a mobile anti-aircraft gun, resulting in the Crusader AA Mk.I, which featured a Bofors 40mm cannon mounted in an open topped turret. To better counter low-flying aircraft, the Crusader AA Mk.II armed with two 20mm Oerlikon cannons was developed, which was slightly modified to result in the Mk.III, which moved the radio to the hull to free up space in the gun turret. A total of about 600 AA Mk.II/Mk.III were produced and they served in Europe from Normandy onwards.About the Model1/48 scale assembly kit of the British Crusader Anti-Aircraft Tank Mk.III.A thorough study of the actual tank has resulted in accurately reproduced features such as brand new molded parts for additional armor and side skirts.Unique open turret features 20mm cannons, ammunition drums, and other internal details.Die-cast chassis gives an added sense of volume for enhanced realism.Easy to assemble tracks feature one-piece straight sections with realistic sag effect.2 types of markings included.