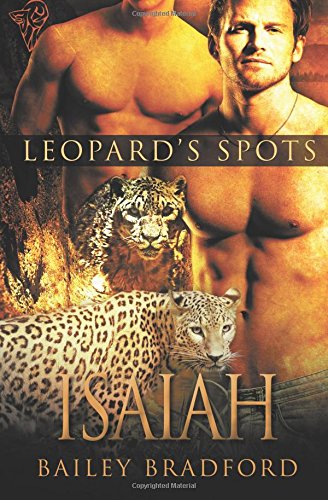 Book four in the Leopard’s Spots Series Snow leopard shifter Isaiah Trujillo isn’t a doctor like his brother Tim, but he’s a good guy and when he meets Bae Allen Warren, he knows he’s found the one man to make his life complete.Snow leopard shifter Isaiah Trujillo wasn’t the brightest guy. His brother was a doctor with more letters after his name than in it, and Isaiah was just a mechanic. But, he strived to be a good person, and that included accepting the offer to volunteer at a GLBTQ youth centre. He’s nervous as hell, but Isaiah’s determined to do what he can to help. Bae Allen Warren is a veterinarian with a mobile practice. It allows him more freedom than having an actual building he had to work out of. He had more baggage than any man should, thanks to his messed up shifter family. His lepe, or clan, was a source of constant stress and guilt. But the leader, his grandfather, makes demands on Bae he can’t ever fulfil for moral and other reasons. When Bae and Isaiah meet, it’s instant attraction. They know they’re mates, but there’s so many obstacles in their way, not the least of which are the stalkers who seem determined to kidnap Bae.