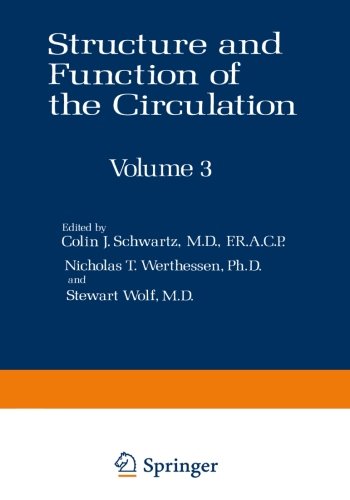 Buy Online Structure and Function of the Circulation: Volume 3 at lowest price (7799 Rs) on Amazon India

This is the third volume of the comprehensive series on Struc­ ture and Function of the Circulation, edited by Dr. Colin J. Schwartz with the collaboration of Nicholas T. Werthessen and Stewart Wolf. Dr. Schwartz, an authority on vascular structure and function and a respected investigator in this field for many years, selected as authors for the chapters an outstanding group of scientists from various parts of the world. As indicated in the Preface, the impetus for this broad treat­ ise evolved from the scientific sessions of three interdisciplinary international conferences held in Lindau in 1970, in Heidelberg in 1973, and Totts Gap, Pennsylvania, in 1976 as well as from numerous informal discussions. The subjects dealt with in these three volumes range from the roots of our knowledge in ancient history to the most recent inform­ ation on contractile proteins of smooth muscle cells. The structure, distribution, and dynamics of arteries, veins, and lymphatics are described in chapters on the systemic circulation as well as that of the heart, the vessels themselves, the brain, nerves, and viscera. Descriptions of ultrastructure, histochemistry, metabolism, and func­ tion of endothelium and of vascular smooth muscle and of vascular changes in aging are all included in the vast scope of this under­ taking.