You are here: Home / From Mesopotamia to Iraq – A Concise History Translated by Hans J... 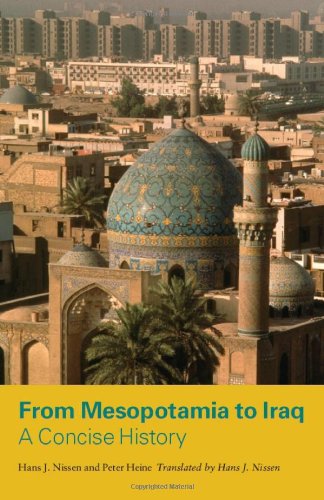 The recent reopening of Iraq’s National Museum attracted worldwide attention, underscoring the country’s dual image as both the cradle of civilization and a contemporary geopolitical battleground. A sweeping account of the rich history that has played out between these chronological poles, “From Mesopotamia to Iraq” looks back through ten thousand years of the region’s deeply significant yet increasingly overshadowed past. Hans J. Nissen and Peter Heine begin by explaining how ancient Mesopotamian inventions – including urban society, a system of writing, and mathematical texts that anticipated Pythagoras – profoundly influenced the course of human history. These towering innovations, they go on to reveal, have sometimes obscured the major role Mesopotamia continued to play on the world stage. Alexander the Great, for example, was fascinated by Babylon and eventually died there. Seventh-century Muslim armies made the region one of their first conquests outside the Arabian peninsula. And the Arab caliphs who ruled for centuries after the invasion built the magnificent city of Baghdad, attracting legions of artists and scientists. Tracing the evolution of this vibrant country into a contested part of the Ottoman Empire, a twentieth-century British colony, a republic ruled by Saddam Hussein, and the democracy it has become, Nissen and Heine repair the fragmented image of Iraq that has come to dominate our collective imagination. In hardly any other continuously inhabited part of the globe can we chart such developments in politics, economy, and culture across so extended a period of time. By doing just that, the authors illuminate nothing less than the forces that have made the world what it is today.