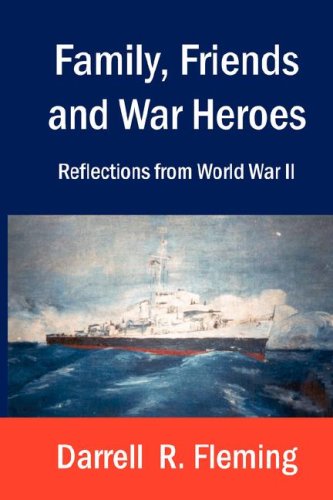 This book is not about military campaigns and battle strategies as usually told by historians and other military writers. It is the story of a seaman who willingly served his country in both the treacherous waters of the Atlantic and raging typhoons of the Pacific all the while being concerned about his family back home. It is the story of challenges faced by his family while he served aboard one of the most effective fighting ships of World War II. It is the story of dramatic experiences of brave young men at sea and happy times as well. It is the story of a ship and its journey of many thousands of miles delivering convoys, fighting German submarines, training with Underwater Demolitions Teams, delivering UDT 7 to the beaches of Okinawa, surviving numerous Japanese fighter, bomber and kamikaze attacks for days on end, taking a direct hit from a Japanes shore battery, burying its own at sea and entering Tokoyo Bay to retrieve Recovered Allied Military Personnel from Japanese prisons. It is the story of other seamen and officers of the “trim but deadly” destroyers as they performed their duties and fulfilled their responsibilities to each other in good times and dangerous times. It is the story of their return home, even with undocumented wounds, to make valuable contributions to their communities and help propel the United States to unimaginable heights. It is the story of respect and friendships that grew out of their experiences and continues today. Most importantly, it is the story of true American war heroes who served nobly and faithfully and helped achieve victory for all mankind.