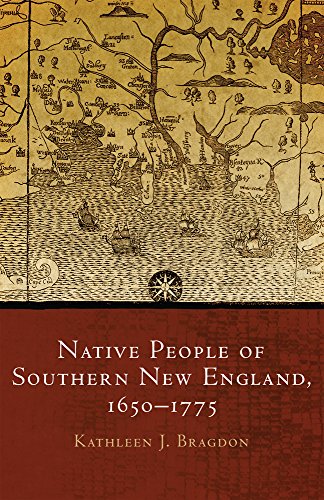 Despite the popular assumption that Native American cultures in New England declined after Europeans arrived, evidence suggests that Indian communities continued to thrive alongside English colonists. In this sequel to her “Native People of Southern New England, 1500-1650,” Kathleen J. Bragdon continues the Indian story through the end of the colonial era and documents the impact of colonization.

As she traces changes in Native social, cultural, and economic life, Bragdon explores what it meant to be Indian in colonial southern New England. Contrary to common belief, Bragdon argues, Indianness meant continuing Native lives and lifestyles, however distinct from those of the newcomers. She recreates Indian cosmology, moral values, community organization, and material culture to demonstrate that networks based on kinship, marriage, traditional residence patterns, and work all fostered a culture resistant to assimilation.

Bragdon draws on the writings and reported speech of Indians to counter what colonists claimed to be signs of assimilation. She shows that when Indians adopted English cultural forms–such as Christianity and writing–they did so on their own terms, using these alternative tools for expressing their own ideas about power and the spirit world.

Despite warfare, disease epidemics, and colonists’ attempts at cultural suppression, distinctive Indian cultures persisted. Bragdon’s scholarship gives us new insight into both the history of the tribes of southern New England and the nature of cultural contact.