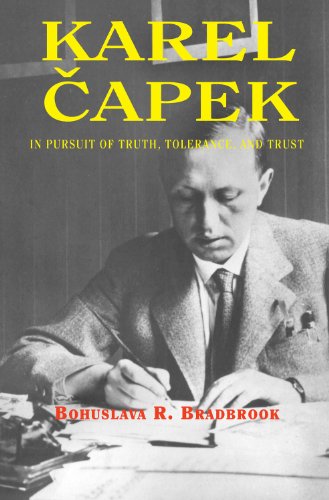 Karel Capek is the most important, most versatile, but also the most neglected Czech writer in the twentieth century. His plays RUR and “From the Life of Insects” created a sensation in London in the 1920s; his word robot was introduced into the Oxford English Dictionary while his other plays as well as novels, short stories, essays, and travelogues followed in English translations in quick succession until cultural links were broken off by the war. Because of his liberal, anti-war views Capek’s works were blacklisted by the Nazis occupying his homeland, as well as later by the communists. Presenting a study of all genres Capek used, BRB’s book pays the debt history owes to Capek. Both as a writer and as a journalist, Capek sought the truth: in the epistemological sense, how we acquire knowledge; in the moral one, how we apply it to our behaviour. Recognizing great differences between individuals, Capek recommends tolerance and mutual trust as the best way towards the improvement of democratic human relations. His philosophical trilogy Hordubal, Meteor and An Ordinary Life — is the best artistic expression of these ideas; as a journalist, he conveyed them explicitly. Capeks science fiction works show his admiration for the achievements of science and technology; he forecast the use of nuclear power, but strongly warned against its abuse. His readers particularly appreciated his common sense, wit and humour. Karel Capek was a man who taught through laughter.