You are here: Home / Terrorism and the State: A Critique of Domination Through Fear (Praeger... 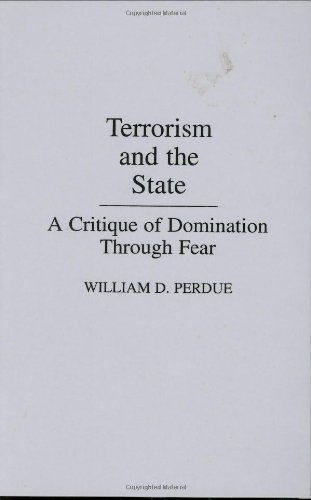 Buy Online Terrorism and the State: A Critique of Domination Through Fear (Praeger Security International) at lowest price (9058 Rs) on Amazon India

Terrorism and the State is a volume on the political economy of terrorism. Emphasizing the role of ideological systems in the definition of political violence, this book is theoretical, historical, and critical. It first presents and refutes the two most commonly expressed definitions of terrorism: the absolutist view, a simplistic picture of international deviance on the part of fanatics, and the liberal relativistic view, one man’s terrorist is another man’s freedom fighter. Both views focus on the definition of behaviors rather than on the real relations of domination and subjugation embodied in the social structure. Neither view can be used as a vehicle when analyzing institutionalized forces of domination through fear. The author suggests that there is presently a double standard of terrorism, one for the state and the other for its opponents. Terrorism and the State reframes the terrorism debate. A historical review supports a revisionist position that places the issue in the context of global relations. Attention is given to the role of the media in the selective selling of international terrorism. Having established his framework, the author proceeds through the investigation of historically grounded cases to systematically analyze state terrorism: the coercive power of today’s nuclear weapon state, global apartheid, terrornoia, settler terrorism, holy terror, and, finally, surrogate terrorism. Terrorism and the State develops its framework for the terrorism debate within the first three chapters: The Ideology of Terrorism, Terrorism and the State, and Mediaspeak: The Selling of International Terrorism. The remainder of this volume concentrates on historically grounded cases: The Real Nuclear Terrorism; Racial Terrorism: Apartheid in South Africa; Terrornoia and Zonal Revolution: The Case of Libya; Settler Terrorism: Israel and the P.L.O.; Holy Terror: Iran and Irangate; Surrogate Terrorism: The United States and Nicaragua