You are here: Home / Reports of Cases Argued and Determined in the Supreme Judicial Court of... 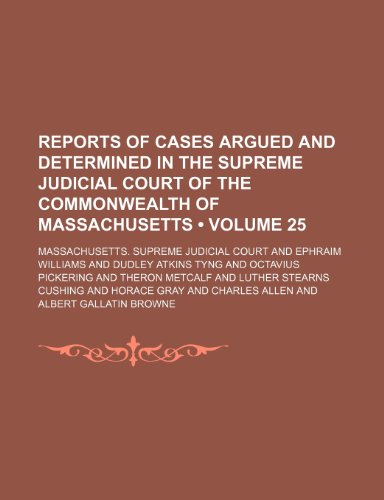 This historic book may have numerous typos and missing text. Purchasers can download a free scanned copy of the original book (without typos) from the publisher. Not indexed. Not illustrated. 1858. Excerpt: … Cold Spring Iron Works v. Inhabitants of Tolland. estopped tojdeny the facts which he had induced the plaintiff to believe, and upon which the plaintiff had acted. 3 Stephens’s Nisi Prius, 2686; Hall v. White, 3 C. & P. 136; Cowen & Hill’s Notes to Phillipps on Ev. vol. 2, pt. 1, 205, 206, and authorities there cited; Price v. Harwood, 3 Camp. 108; Plait v. Squire, 12 Met. 494; First Presbyterian Congregation in Salem v. Williams, 9 Wend. 147. /. Sumner, for the defendant. By The Court. The question of conversion was a question of fact for the jury, and as such it was left to them on the evidence. The fact that the defendant said, in the first instance, that the horses were his, and that he bought them and had the possession and control of them, was strong evidence against him, but it was not conclusive; and the court could not, therefore, charge as matter of law, that it was. Exceptions overruled. The Cold Spring Iron Works Vs. The Inhabitants Of Tolland. Under a statute by which a stream not navigable is made the boundary of an incorporated territory, the centre of the stream, and not the edge or margin, is the true boundary line; and this is so although the monuments are described as standing on the margin or bank of the stream. This was an action on the case, to recover damages to the plaintiffs’ property, by an alleged defect of a bridge across the Farmington River, and was submitted to the court of common pleas, and, by appeal, to this court, upon the following agreed statement of facts: –The accident occurred on the east half of the bridge. The defendants deny that any portion of the bridge is situated within the limits of the town of Tolland, and allege that the east bank of the river forms the west boundary of the town, and the parties propose to..