You are here: Home / The People of the Eastern Orthodox Churches, the Separated Churches of... 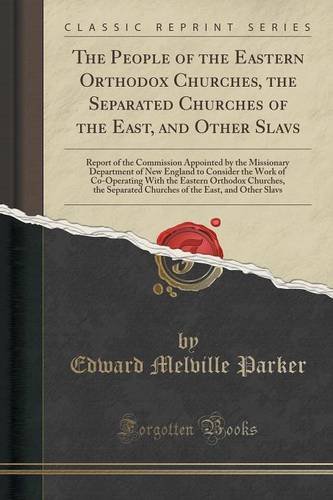 Excerpt from The People of the Eastern Orthodox Churches, the Separated Churches of the East, and Other Slavs: Report of the Commission Appointed by the Missionary Department of New England to Consider the Work of Co-Operating With the Eastern Orthodox Churches, the Separated Churches of the East, and Other Slavs
This is the report in full, of which extracts were read at the Department Council of New England in Providence, in October, 1912, by the committee appointed to consider the work of co-operating with the Eastern Orthodox Churches, the Separated Churches of the East, and other Slavs. The report has been somewhat expanded and brought up to date.
Foreigners are pressing into New England in increasing numbers, and the Germanic, Scandinavian, and English-speaking immigrants are now being succeeded not only by the Italians, but by the Greeks, Syrians, and many Slavic peoples of Eastern Europe. The problem of dealing with these races is no longer a theoretical one, but one that comes into almost every one of our home towns in an acute and insistent way. Co-operation with these fellow Christians, and a helpful ministry to them in this new land, will, we trust, ultimately result in the restoration of inter-communion, after centuries of separation, between East and West; but the divisions of centuries are not remedied in a few months, and there must be a large preliminary clearing away of misunderstandings, and a great increase of knowledge, before we can deal helpfully and practically with this vital home question of the foreigner in our New England towns and cities.
The ignorance of the average American about these latest comers to our shores is profound! All Slavs are indifferently called Polanders; some, by a strange perversion of facts, are called Huns, the name of no Slavic race, but of their oppressors in Hungary. Albanians, Greeks, Turks, and Syrians, and any other unknown races, are often indifferently termed “Dagoes.” Russian and Syrian Orthodox Christians are called “Greek Catholics,” even in official government reports, this being the name properly applied to men of the Greek race who have submitted to the Papal obedience.
About the Publisher
Forgotten Books publishes hundreds of thousands of rare and classic books. Find more at www.forgottenbooks.com
This book is a reproduction of an important historical work. Forgotten Books uses state-of-the-art technology to digitally reconstruct the work, preserving the original format whilst repairing imperfections present in the aged copy. In rare cases, an imperfection in the original, such as a blemish or missing page, may be replicated in our edition. We do, however, repair the vast majority of imperfections successfully; any imperfections that remain are intentionally left to preserve the state of such historical works.

BUY NOW
Click to Read Customer Reviews on Amazon
http://onlinedeals.discount/wp-content/uploads/2016/06/0nlinedeals.png 0 0 dailydeals http://onlinedeals.discount/wp-content/uploads/2016/06/0nlinedeals.png dailydeals2017-03-27 04:31:23The People of the Eastern Orthodox Churches, the Separated Churches of the East, and Other Slavs: Report of the Commission Appointed by the Missionary ... with the Eastern Orthodox Churches, the [email protected] Rs [Mrp:-899]