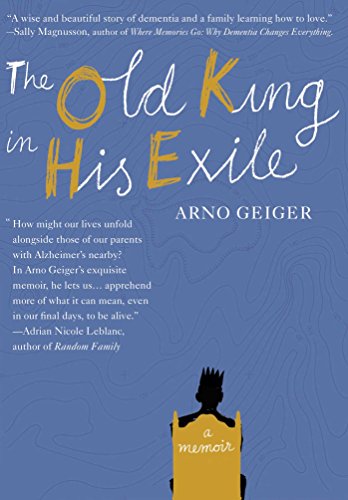 “How do we keep one another’s company?  How might our lives unfold alongside those of our parents with Alzheimer’s nearby? In Arno Geiger’s exquisite memoir, he lets us into the private and sometimes sacred space he found in the company of his father—a relationship nurtured by his own willingness to share a mutual solitude, and to visit those places where his father’s spirit was broken and where it thrived. The tender stories in The Old King in His Exile hold the quiet love between these men, and invite the reader to apprehend more of what it can mean, even in our final days, to be alive.” —Adrian Nicole Leblanc, author of Random Family: Love, Drugs, Trouble and Coming of Age in the Bronx

Arno Geiger’s father was never an easy man to know. Born into a farming family in Austria and conscripted into World War Two as a seventeen-year-old “schoolboy soldier,” he was later reticent about the past. When he started to change, Arno assumed it was due to the effects of aging and the breakup of a thirty-year marriage. But it turned out to be more than that.

As Arno Geiger writes in this heartbreaking and insightful memoir of his father’s later years, “Alzheimer’s is an illness that, like everything of significance, tells us about a lot more than just itself. Human characteristics and society’s mores are enlarged by the illness as if in a magnifying glass. The world is confusing to all of us, and when you look at it with a clear eye you see that the difference between the healthy and the sick is simply the degree to which they are able to conceal the confusion on the surface.” Knowing that his father won’t ask for help, Arno sets out on a journey to get to know his father at last. Arno remains at his side, listens to his words that are often full of wonderful, unexpected poetry, and discovers that despite everything, his father has not lost his wit, charm, and self-assurance.

Awash with light, full of life and surprising insights, and often very funny, The Old King In His Exile is a wonderfully affecting story that will offer solace to anyone who has struggled with losing an aging loved one.