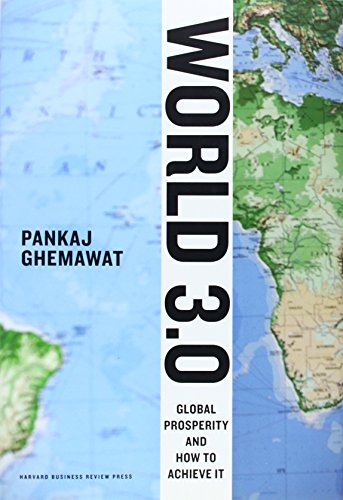 Buy Online World 3.0 Global Prosperity and How to Achieve it at lowest price (755 Rs) on Amazon India

Since the financial crisis of 2008, many of us have had to reexamine our beliefs about markets and globalization. How integrated should economies really be? How much regulation is right? Many people fuse these two dimensions of choice into one, either favoring both globalization and deregulation or opposing both of them.It doesn’t have to be that way. In World 3.0, award-winning author and economist Pankaj Ghemawat reveals the folly in both of these responses. He calls for a third worldview one in which both regulation and cross-border integration coexist and complement one another. Ghemawat starts by exposing common assumptions about globalization to hard data, proving that the world is not nearly as globalized as we think. And he explains why the potential gains from further integration are much larger than even pro globalizers tend to believe. He then tackles market failures and fears job losses, environmental degradation, macroeconomic volatility and trade and capital imbalances that opponents of globalization often invoke. Drawing on compelling data, he shows that increased globalization can actually alleviate some of these problems. Finally, Ghemawat describes how a wide range of players businesses, policy makers, citizens, media can help open up flows of ideas, people, and goods across borders, but in ways that maximize the benefits and minimize the potential side effects. World 3.0 dispels powerfully entrenched but incorrect assumptions about globalization. Provocative and bold, this new book explains how people around the world can secure their collective prosperity through new approaches to cross-border integration. Ghemawat’s thinking will surprise and move you no matter where you stand on globalization.