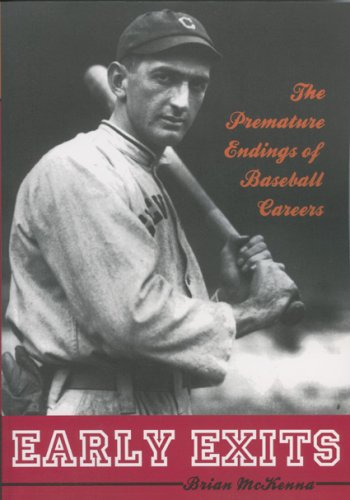 Most baseball players try to prolong their careers for as long as possible. They will compete on the field until their bodies give out or until they are no longer effective. Since the early days of the sport, however, many players have had to abruptly abandon the game they love for myriad reasons. While some leave by their own accord, others are not so fortunate. Although many were forced out of the game because of injury, other careers were derailed by dependency, scandal, suicide, or war. Some left to take another job or play another sport, and a few participated in criminal activities, even murder. In Early Exits: The Premature Endings of Baseball Careers, author Brian McKenna recounts the individual histories of those men and women who, for one reason or another, forfeited their participation in America’s pastime. Hundreds of players are profiled here: from Shoeless Joe Jackson, who was banned from baseball following the 1920 Black Sox scandal to Brooklyn Dodger Roy Campanella, who suffered a paralyzing car accident in 1958, to Minnesota Twins star Kirby Puckett, who left the game because of damage to his right eye.