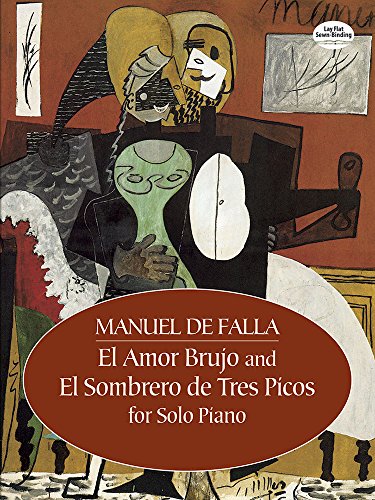 Although influenced by the impressionism of Debussy, Dukas, and Ravel, Manuel de Falla (1876 1946) remained distinctively Spanish, with roots that drew upon both Andalusian folk music and his country’s classical traditions. With these two popular ballets, “El Amor Brujo” (Love, the Magician) and “El Sombrero de Tres Picos” (The Three-Cornered Hat), he brought the world’s attention to the music of Spain.
In “El Amor Brujo, ” a gypsy lass is haunted by the ghost of a former swain until her new lover devises a plan to entice the spirit away. Each of the ballet’s scenes evokes a different mood that is seamlessly woven into a brilliant musical tapestry. “El Sombrero de Tres Picos” recounts an elderly man’s comic and frustrating attempts to seduce a miller’s wife. Its premiere produced by Diaghilev for the Ballets Russe, with choreography by Massine and designs by Picasso met with an instant and lasting success.
Falla himself made these arrangements of the complete ballets for piano solo. Several of the individual pieces have become standards in the solo piano repertoire, including “The Neighbour’s Dance” and the great favorite, “Ritual Fire Dance.””