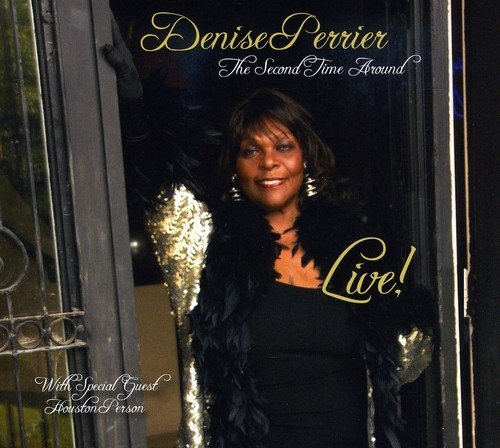 The Second Time Around is the second album that Denise Perrier has recorded with tenor saxophonist Houston Person, and they go together like champagne and caviar.

Denise Perrier, who spent most of her thirty-year career performing in the San Francisco Bay Area and touring Europe, Latin America and Asia, harkens back to the time when a singer told the story and left the rest to the instrumentalists. She has a very welcoming straight-ahead style, concentrating on the standards and adding blues and Latin for variety. Her versatility, choice of material and dynamic stage presence make her very a very appealing and popular performer. No matter what the venue or musical configuration, Denise connects with audiences…that’s her forte and why she is known ‘the voice with a heart.’

Denise has a rich contralto voice and sings ballads and blues with equal artistry. She has performed in theatrical productions: ‘Unforgettable,’ a tribute to Dinah Washington, which toured the US and Europe; ‘Blues in the Night’ and ‘In the House of the Blues,’ in which she portrayed Bessie Smith; and the vaudeville musical ‘One Mo’ Time.’

Denise was featured in the Grammy-nominated CD, Color Me Blue, with Brother Jack McDuff, and has produced three previous CDs: I Wanna Be Loved, also with Houston Person, and East Meets West, which includes sides performed in Russia. Last year she came out with Live at Yoshi’s; Blue Monday Party, which received critical acclaim and reached high on the jazz charts.

‘Listening to her is like sipping the best glass of wine you ever had in your life. You savor every note that comes out of her mouth.’- Dee Spencer, pianist and professor of music.