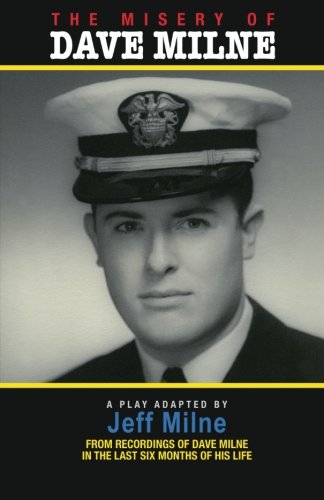 This is a play about Dave Milne (an immigrant, military school survivor/victim, Ivy League graduate, Naval officer, 10% disabled veteran, dissident philosopher and much more) adapted by his son, from recordings made of Dave in the last six months of his life. The play travels from a fairly normal childhood until age 12, to being sent off to a fancy military boarding school and being literally tortured and ostracized by the children of the rich (and sometimes famous), his classmates. Then he went on to Columbia University, to participate in NROTC, got married, eventually went to Vietnam, had a mental collapse after returning home and just three months later, he became a parent. Dave then had to struggle in the civilian economy to try to support his family. While the play is generally tragic, there is a fairly large amount of humor (dark and otherwise) along the way and Dave even breaks into song once. While Dave might not always be a sympathetic character, his take on life is one of a kind. This anecdote filled play shows Dave in virtually the whole range of human emotions.