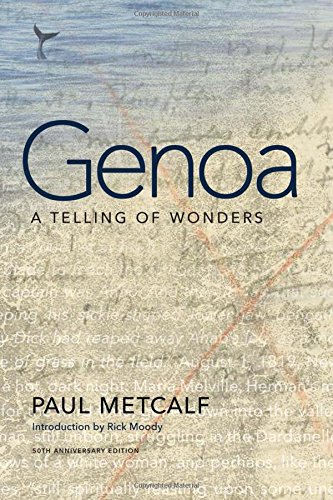 “[Genoa] invites us to pass our minds down a new but ancient track, to become, ourselves, both fact and fiction, and to discover something true about the geography of time.”-William Gass, The New York Times “Genoa is a spectacular confrontation with Melville’s work, the journals of Columbus and molecular biology-all folded into a hallucinatory narrative about two brothers and their different paths through the American century.”-Publishers Weekly “Much like his great-grandfather, Herman Melville, Paul Metcalf brings an extraordinary diversity of materials into the complex patterns of analogy and metaphor, to affect a common term altogether brilliant in its imagination.”-Robert Creeley “A unique work of historical and literary imagination, eloquent and powerful. I know of nothing like it.”-Howard Zinn First published in 1965, Genoa is Paul Metcalf’s purging of the burden of his relationship to his great-grandfather Herman Melville. In his signature polyphonic style, a storm-tossed Indiana attic becomes the site of a reckoning with the life of Melville; with Columbus, and his myth; and between two brothers-one, an MD who refuses to practice; the other, an executed murderer. Genoa is a triumph, a novel without peer, that vibrates and sings a quintessentially American song. Paul Metcalf (1917-99) was an American writer and the great-grandson of Herman Melville. His three volume Collected Works were published by Coffee House Press in 1996.