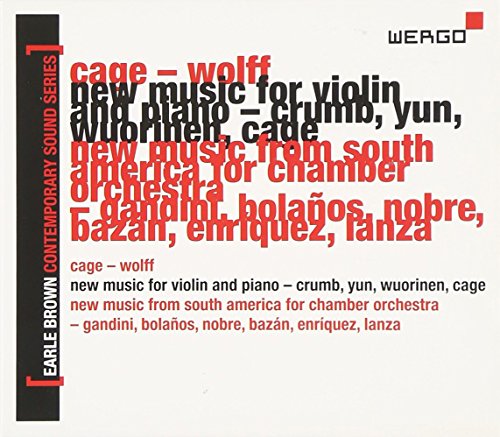 ‘Earle Brown: A Life in Music Vol. 6’ is the eagerly-awaited final installment in a unique series: the 18 LPs of Earle Brown’s legendary Contemporary Sound Series, recorded between 1960 and 1973, have become a rarity in great demand since the series was discontinued in 1978. These rare and historically important recordings have been carefully digitised and remastered by the Earle Brown Music Foundation. The complete series is now available in six 3-CD boxes by WERGO. CD 1 contains works by John Cage and Christian Wolff from the early 1960s: In Cage’s Cartridge Music , sounds are generated by inserting different objects in the pick-up head of the gramophone. Due to their composition structure, Wolff’s works Duo for Violinist and Pianist , Summer and Duet II have in common that no interpretation is identical with the next one. CD 2 presents the outstanding violinist Paul Zukofsky, brilliantly accompanied by the pianist Gilbert Kalish, performing works by George Crumb, Isang Yun, Charles Wuorinen and John Cage which make extremely high demands on the performer. CD 3 contains works by the South American composers Gerardo Gandini, César Bolaños, Marlos Nobre, Oscar Bazán, Manuel Enríquez and Alcides Lanza, performed by the New Sound Composers-Performers Group under the direction of Alcides Lanza.