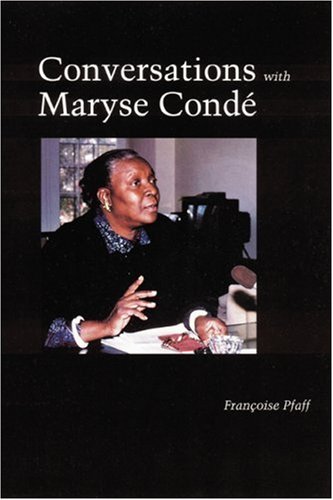 This book is an exploration of the life and art of Maryse Conde, who first won international acclaim for Segu, a novel about West African experience and the slave trade. Born in Guadeloupe in 1937, Conde lived in Guinea after it won its independence from France. Later she lived in Ghana and Senegal during turbulent, decisive moments in the histories of these countries. Her writings-novels, plays, essays, stories, and children’s books-have led her to an increasingly important role within Africa and throughout the world. Francoise Pfaff met Maryse Conde in 1981, when she first interviewed her. Their friendship grew quickly. In 1991 the two women continued recording conversations about Conde’s geographical sojourns and literary paths, her personality, and her thoughts. Their conversations reveal connections between Conde’s vivid art and her eventful, passionate life. In her encounters with historical and literary figures, and in her opinions on politics and culture, Conde appears as an engaging witness to her time. The conversations frequently sparkle with humor; at other moments they are infused with profound seriousness. Maryse Conde is the recipient of the French literary awards Le Grand Prix Litteraire de la Femme and Le Prix de l’Academie Francaise. She currently teaches at Columbia University and her most recent works include Tree of Life and Crossing the Mangrove.