You are here: Home / A History of Birmingham and Its Environs; A Narrative Account of Their... 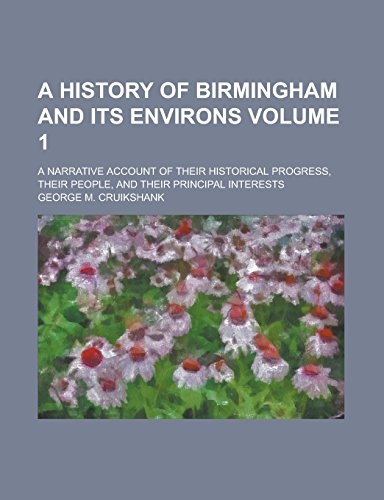 Buy Online A History of Birmingham and Its Environs; A Narrative Account of Their Historical Progress, Their People, and Their Principal Interests Volume 1 at lowest price (2159 Rs) on Amazon India

This historic book may have numerous typos and missing text. Purchasers can usually download a free scanned copy of the original book (without typos) from the publisher. Not indexed. Not illustrated. 1920 edition. Excerpt: …to file his bill of exceptions; that twenty days be allowed the trial judge in which to sign it, and that the case be submitted to the Appellate Court during the call of any division.” Soma or THE EARLY Lawvaas The pioneer lawyers of the Jefierson County bar were Thomas W. Farrar, a gentleman and scholar from North Carolina, who enjoyed the good physical things of this life, if he did not enjoy a large practice; Francis Bugbee, a well educated Connecticut lawyer; W. K. Baylor, whom we have already met as a character in this chapter; the sober, industrious, wiry and gifted E. W. Peck, from York state, and the acute and fearless solicitor and prosecutor, Matthew W. Lindsay, who years afterward became a justice of the State Supreme Court. Not long after them came Peter Walker, of Virginia, whom we have also met, and John F. Forrest, of North Carolina, who moved to Elyton and practiced together. Both afterward became judges of the County Court. About the same year (1825) P. N. Wilson, a young lawyer from Tuscaloosa, settled at the county seat of Jefferson, and Thomas A. Walker added his talents and good character to the Elyton bar a few years afterward. Mr. Walker was elected circuit judge after he moved into Calhoun County. All of these pioneer members of the profession entered the local field in the ’20s. Judge Mudd did not commence to practice as a lawyer until 1839; had the reputation of being a sure collector of “bad debts,” and was for several years circuit solicitor before he ascended the Circuit bench. M. ‘1’. Porter, Alburto Martin (Porter’s partner), John C. Morrow, who had two terms in the Legislature, and G. W. Hewitt (who also formed a partnership), were prominent accessions to the bar of the…