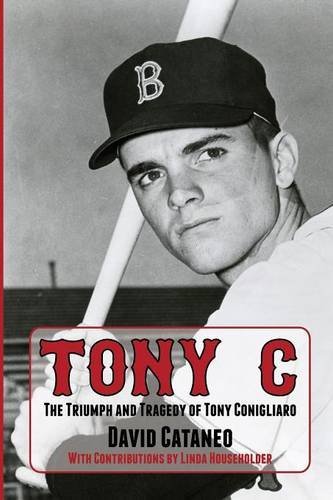 THE ONLY THING BELIEVABLE ABOUT TONY CONIGLIARO’S STORY IS THAT IT HAPPENED.

TONY C, by Boston sportswriter David Cataneo, takes readers through the soaring heights and desperate lows of the iconic Red Sox player–from the “Ted Williams confidence” of his early years and heart-throbbing, record-breaking stardom, to the desperation, comebacks, and final ordeal.

Conigliaro’s wild, off-the field life is also covered in depth – from his playboy adventures and pop star fame, to his confrontations with Carl Yastrzemski and Dick Williams, and failed attempt to make it as a pitcher. The complicated personality of one Boston’s greatest baseball icons is revealed–the mix of brashness and insecurity–the intense nature and deep pride that were challenged to levels few are ever forced to endure.

How different things could have been for Tony C, for his family, for the Red Sox Nation, had he not been in the box that fateful night in August, 1967, had his cheekbone not been shattered, and with it, his dreams, his career, and ultimately his life. But there he stood, and there he fell, and the story of the devastation from that pitch is one of the most dramatic and tragic in the annals of sport.