You are here: Home / The Polar Bears: Monty’s Left Flank: from Normandy to the Relief... 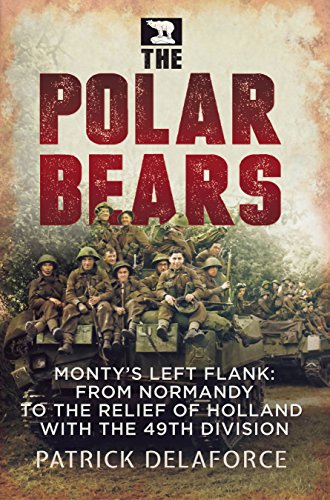 The Polar Bears: Monty’s Left Flank: From Normandy to the Relief of Holland with the 49th Division(English, Paperback, Patrick Delaforce)
Rs. 1346 0% Off
Rs. 1346

Buy Online The Polar Bears: Monty’s Left Flank: from Normandy to the Relief of Holland with the 49th Division at lowest price (1003 Rs) on Amazon India

Originally a Territorial unit with its roots in the West Riding of Yorkshire, the 49th Infantry Division saw action in the ill-fated Norwegian campaign in 1940, before it was appointed to garrison Iceland where it stayed for two years. In August 1944, under the command of the Canadian Army, the Polar Bears acted as Monty’s left flank after the invasion of France. Following the battle for Normandy, the Polar Bears played a key role in the capture of Le Havre, campaigned vigorously in Belgium and garrisoned the ‘island’ between Arnhem and Nijmegen during the winter of 1944. They helped to take Arnhem and then liberated Utrecht and Hilversum; and the Recce regiment were the first to arrive with their armoured cars in Amsterdam. In the final weeks of the war the Polar Bears played a humanitarian role by bringing desperately needed food supplies to the starving population of Holland. During the campaign in North West Europe, the Polar Bears were a completely British division with units drawn from Yorkshire, Durham, Royal Scots Fusiliers, Tyneside Scottish, Lincolnshire, Leicestershire, Kent Yeomanry and Suffolk Hussars. In August 1944 they were joined by the South Wales Borderers, the Gloucesters and the Essex regiments. The Polar Bears suffered 11,000 casualties and earned a Victoria Cross. Following the successful formula adopted for his other divisional histories, Patrick Delaforce draws on contributions from the soldiers who fought with the Polar Bears – privates, NCOs and officers alike. In their own words they tell just what it was like as they fought through from Normandy to the relief of Holland.