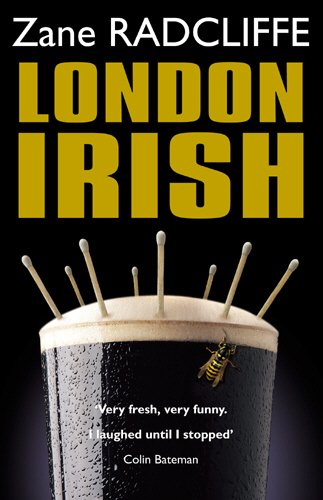 Half-Irish, half-Scots (and half-cut), Bic runs a moderately-successful stall selling crepes in Greenwich market in the shadow of the Millennium dome (which is news to his father, who thinks he’s dragging his heels a bit over his botany degree).
He’s a decent enough fellow, quite organized really, with his own set of rules – although he has, he is the first to admit, broken most of them. For starters, he spends far too much time in the pub – and then there’s that one about not sleeping with another older (and with a predilection towards extreme violence) man’s wife…
And Bic’s dream, while not topping the charts in the ambition stakes, is decent enough: to meet the right girl, return to Ulster, settle down and start Northern Ireland’s first ostrich farm. But things haven’t been going too well recently: the flat below his burnt to a cinder leaving its incumbent (deceased) melted to the loo seat; then a fellow stall-holder (also deceased) seems to have hit the deck (literally) of the nearby ‘Cutty Sark’ in suspicious circumstances and now the Culture Secretary has gone and run over Bic’s beloved dog while supervising the arrangements for London’s world-beating Millennial celebrations.
But then a silver – or rather a mysterious, somewhat elusive raven-haired – lining appears in the guise of Roisin. Not only has she taken over the stall opposite Bic’s, she’s also from home, heart-stoppingly beautiful and, as far as Bic can tell and if you don’t count her two over-protective brothers, single. While wedding bells might still be a little way off, Bic felt things were looking up – until the morning he woke with a blinder of a hangover and discovered he was BRITAIN’S MOST WANTED MAN – on the run, with Roisin as his hostage and 14 murders to his name…