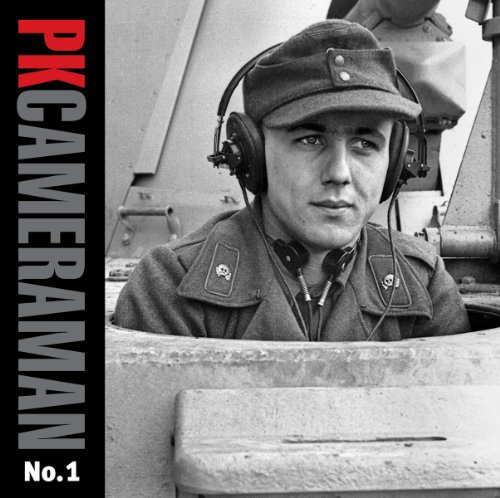 PK CAMERAMAN, is a unique in-depth photographic study of the German Wehrmacht (Armed Forces) during World War Two. Professionally photographed by German war correspondents of the Propaganda Kompanie (PK). Presented in an extra-large 12×12 format with full page and double page spreads. This unique photo book series offers the enthusiast an up close look into the military life of the German soldier and the equipment he used during the Second World War. February 1944 in the Belgian town of Eeklo. Assembled on the cobblestones of the market square is a platoon of newly issued Marder IIIs of 1. Kompanie, Panzerjager Abteilung 19 (L) of Luftwaffen Feld-Division 19. Freshly painted in ordinance tan and armed with the potent 7.5cm Pak 40 anti-tank gun, these small yet rugged fighting vehicles project a formidable image. A highly decorated German Army Hauptman conducts an inspection of the unit, conversing with the crews as they check their communication equipment and other gear. With their special field-gray Panzer uniforms adorned with an assortment of medals and badges, these veterans of the Eastern Front are the very picture of confidence and professionalism. When the commanding officer completes his review, 1. Kompanie proceeds out of Eeklo into the countryside en route to its next posting at the former Belgian Army barracks in Zedelgem where it joins-up with 2. and 3. Kompanie of Pz.Jg.Abt. 19 (L). These two units consist of Luftwaffe troops equipped with halftrack-towed 7.5cm Pak 40s and car-towed 2cm Flak 38s. Wearing a mixture of Luftwaffe blue-grey and camouflage uniforms, these troops lack the combat decorations and seasoned demeanor of the Marder III crewmen, but nevertheless manage to convey an impression of discipline and determination. The Abteilung’s activities have been staged especially for the camera of Kriegsberichter (KB, war correspondent) Karl Kurth of Propaganda Kompanie 698 who has been assigned to photograph the Atlantic Wall defenses. Accompanied by a newsreel cameraman, whose footage is destined to appear in a March ’44 episode of Die Deutsche Wochenschau, Kurth’s objective is to assure the German home front of the Wehrmacht’s ability to repel the anticipated Allied invasion. Being masters of their trade, these professional propagandists are able to transform an unexceptional late-war formation into a superior fighting force through the art of composition, juxtaposition and the editorial process. Featuring several rolls of film shot by KB Kurth, complimented by detailed captions and maps, this first installment of PK CAMERAMAN is a thorough photographic study of the Kriegsberichter’s craft, as well as a rare and fascinating inside look at a German anti-tank battalion preparing to defend Fortress Europe.